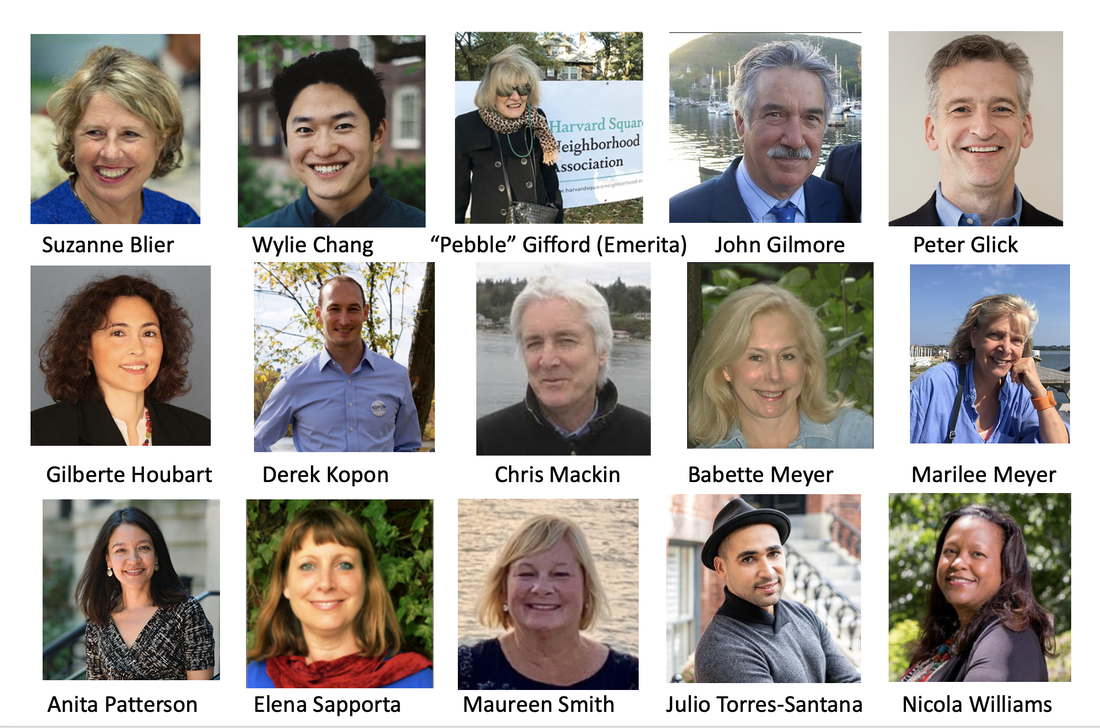 ​Babette is a Porter Square resident and has recently retired from an Executive Search Firm that focused on Non-Profits. Before that she had worked at WGBH and other local media doing outreach and fund-raising. She moved to Cambridge after graduate school having been drawn here by the diversity of people and neighborhoods.  A history buff, she is interested in what Harvard Square must have been like for residents in the 1700s.

​A Harvard Square resident, and long-time Cambridge renter, is President of Ownership Associates, Inc. of 17 Story Street and special advisor for American Working Capital, LLC. He lectures internationally and is also adjunct lecturer at the Rutgers School of Management and Labor Relations.
Derek Kopon
Derek is an astrophysicist and engineer at the Harvard-Smithsonian Center for Astrophysics and interested in mitigating  global warming through zero-emission energy technologies, such as solar power and other renewables.

​An attorney and realtor, lives on Hilliard Place. She has long been active in Harvard Square preservation projects in part through her leadership role on the Harvard Square Defense Fund. She also serves on the Harvard Square Advisory Committee.
Gilberte Houbart (on leave)
​Gilberte grew up in France with a French father and a Colombian mother. She lives in the Huron Avenue area and works leading Product Design to create the user experience of large scale applications (finance, travel, commerce, healthcare). Gilberte has lived in the Huron area for 20+ years and came here originally for her Masters in Media Arts and Science at the MIT Media Lab.

​​John has lived in Cambridge all his life and is a resident of West Cambridge. He is a retired Securities Litigation attorney at DLA Piper and has been active in historic preservation efforts and led the effort to create a conservation district in his neighborhood. He writes: “My two passions are gardening and history, including historic preservation.

Julio is an is an award winning architect with an interest in the functionality of living spaces and is a realtor at Leading Edge Real Estate. Born in Dominican Republic, he is a graduate of the Graduate School of Design.

​Is an Independent scholar, author, art historian, appraiser, and guest curator, Marilee grew up in Wellesley and lives in Mid-Cambridge. An art and architectural historian, she founded the Arts and Crafts Department at Skinner Auction Gallery. An activist and preservationist, she is a frequent presence at Cambridge Historical Commission meetings bringing insights on architectural history.

Maureen Smith
Maureen, a renter, with long standing family ties in the Cambridge area,  helped bring neighbors  together during COVID. She worked for many years in IT project management at Mass General Brigham and has been a wonderful help in organizing things for HSNA and other groups.

​A Harvard Square resident, founded The Williams Agency, a marketing and business strategy firm. She helped to launch the Boston Local Food Festival (Boston’s premier food event) and In 2015 was recognized as a Cambridge Food Hero.  She also helped to build Cambridge Carnival International into one of the city’s largest festivals.

​Peter, a Huron area resident, is an investor and serial entrepreneur focused on contract research organizations (CROs), clinical diagnostics, and other products and services to improve human health and speed therapeutic development with specialties. In Corporate strategy, finance, marketing and sales. A graduate MIT’s Sloan School of Management, from 2010-2017 he was Executive Director of Dynex Technologies.

​A Fuller Place resident, teaches art and architectural history at Harvard and currently serves as President of the College Art Association. She helped found the Harvard Square Neighborhood Association and also was actively involved in Our Harvard Square.